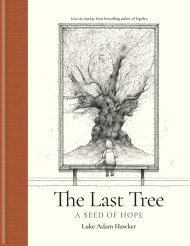 From the Sunday Times bestselling author of Together. Imagine a world without trees. A world that is in many ways like our world, but where…