Choosing whether to capture your scene vertically or horizontally is a decision you should make based on composition, juxtaposition, and how you wish the elements within the frame to be represented.

In the examples shown here of the Golden Temple, the same scene was shot both horizontally and vertically, because at the time deciding which was preferable wasn’t obvious. As the subject was still, this wasn’t a problem: it afforded the photographer plenty of time to reframe the composition. Of course, this isn’t always the case when it comes to street photography: more often than not you are capturing a split-second that will afterwards be gone forever. This means you need to visualise your scene before you shoot it. Indeed, that’s the case with so much photography. It’s important to be able to picture in your mind how you wish a scene to look. This will help you decide how best to shoot it.

When it comes to the Golden Temple, the landscape version is preferable. It captures more of the scenery both behind the homeless man, as well as the pigeons in the foreground, creating more atmosphere.
Then of course there are instances when a vertical orientation is the obvious, and right, choice.

Whether you shoot with a digital SLR, a Holga or the camera on your phone, today’s cameras let you seize the moment and shoot whenever and wherever you like. This makes them perfect for street photography, the genre choice of some of the greatest photographers of all time, with names like Henri Cartier-Bresson, Weegee and Robert Frank turning gritty reality into iconic images. In The New Street Photographer’s Manifesto, Tanya Nagar will open your eyes to the photographic potential of our urban world, offering the tricks and techniques that put you in the right place, at the right time, and let you create amazing photos. 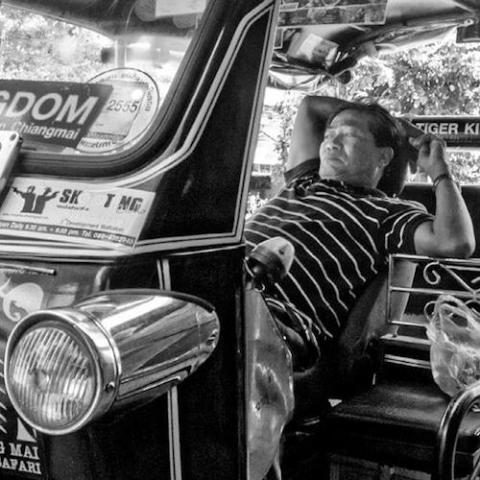